First thing I did was to upgrade the RAM. Got 8Gb from Amazon and installed the RAM (~2 minutes).

Few years later the default harddisk felt slow and I have added an 250Gb SSD Drive:

This is the best investment I did for this Mac. It was like I got a new Mac 🙂

On my Windows PC the UHD resolution worked out-of-the box since the graphic card was pretty performant but on Mac Mini didn’t.

Mac Mini has an old Intel HD3000 graphic adapter that by default shares 288Mb of RAM with the system memory and apparently has a pixel clock limitation.

So, I have ended up connecting the HDMI Output from Mac Mini to the Samsung HDMI input and miniDisplay port from Mac Mini for the secondary monitor that was an usual Full-HD monitor.

Please note that I didn’t use the “natural” miniDisplay Port to Display Port cable that would connect the Mac Mini with the Samsung’s Display Port.

On OSX Mavericks I was able to set 2560×1440 resolution w/o problems by just running SwitchResX and creating this resolution as a custom resolution. Here’s a rough list of the settings for 2560×1440:

After updated to Yosemite strangely this resolution didn’t work anymore out of the box. After some reading on internet I found out that I need to remove the 165 MHz pixel clock limitation in a different way that I did for Mavericks… From this list I’ve picked Dark Void’s script.

Eventually I’ve enabled the HiDPI modes and changed the amount of VRAM to 1Gb to be sure that all things are prepared.

After increasing VRAM (by following the instructions) and rebooting I’ve got a miserable 7Mb of VRAM 🙂 but Turbowald hint’s helped to recover and after next reboot got 1Gb VRAM.

This tool actually helps fixing the kext files, so run it any way.

Now was about time to tune up SwitchResX… After first start I was like…
Wow! The resolutions I need are already listed, no need to create custom ones. 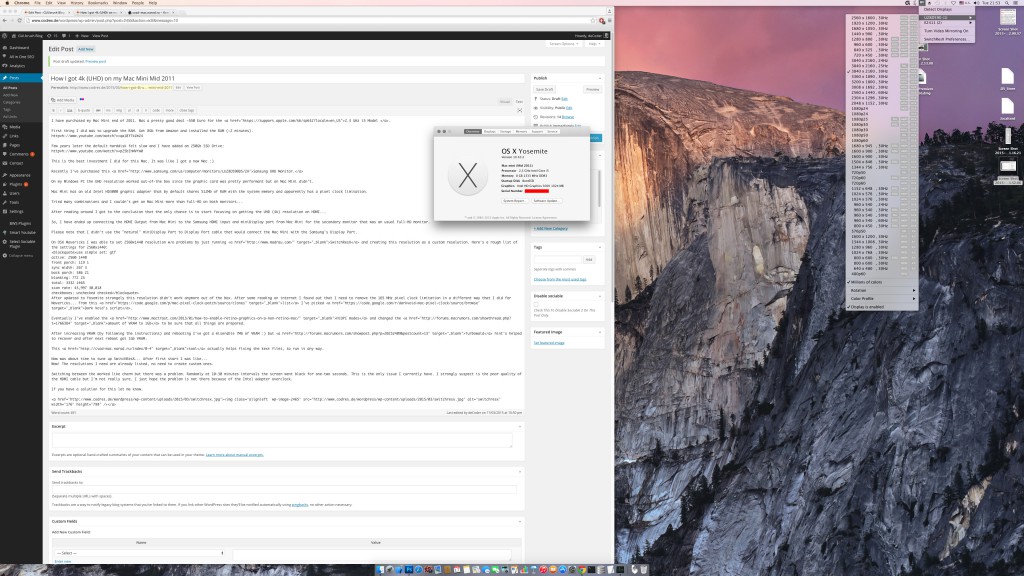 Switching between these resolutions worked like charm but there was a problem. Randomly at 10-30 minute intervals the screen went black for one-two seconds. This is the only issue I currently have. I strongly suspect is the poor quality of the HDMI cable but I’m not really sure. I just hope the problem is not there because of the Intel adapter overclock.

UPDATE 27 March 2015:
On Mac Mini Mid 2011 when using 3840×2160 I couldn’t get rid of instability issues:
– on HDMI I get short image interruptions every few minutes
– on DisplayPort I get constant noise on dark background.

If you have a solution for this let me know.

This site uses Akismet to reduce spam. Learn how your comment data is processed.